The Valley of Fear (Illustrated) 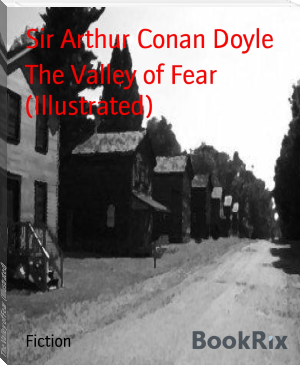 The Valley of Fear is the fourth and final Sherlock Holmes novel by Sir Arthur Conan Doyle. It is based on the supposedly real-life exploits of the Molly Maguires and Pinkerton agent James McParland. The story was first published in the Strand Magazine between September 1914 and May 1915. The first book edition was copyrighted in 1914, published by George H. Doran Company in New York on 27 February 1915, and illustrated by Arthur I. Keller.

Holmes decodes a cipher warning from Moriarty's organization for "Douglas" in "Birlstone", but a corpse is there already. When Mr. Douglas blows the head off his American assassin, he dresses the body as himself, and hides, to throw off the chase for good. Holmes guesses the missing dumb-bell weighted down the killer's clothes in the moat. The calling card left, VV341, is Vermissa Valley Lodge 341. Decades ago for Pinkerton, he went months undercover, first with Freemen in Chicago, then west to desolate mountain coal mine area, to take down corrupt murderers who ran the Valley Freemen Lodge, but criminals pursued. Holmes warns Douglas, when acquitted, to flee England. But Moriarty prevails. The second Mrs. Douglas telegrams that her husband was lost overboard on his way to South Africa on a ship.