Christ in the Night of Glory

The story of Supreme Leader's presence at the homes of Armenian and Assyrian martyrs in the years 1984 to 2015 Von: Sahba Publications, Prof Fazlollah Nikayin 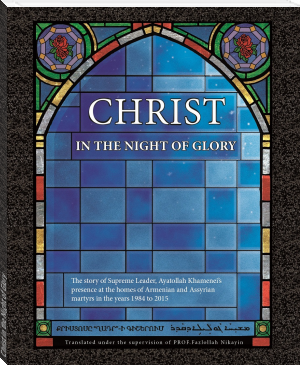 A book narrating the story of Ayatollah Khamenei’s visit to homes of Christian martyrs is translated into English to provide international readers with the chance to read the interesting events in the meetings. Since coming to office as president of the Islamic Republic of Iran, Ayatollah Khamenei has been frequently visiting the families of Iranian martyrs. While the majority of the meetings have been with the families of Muslim martyrs, a considerable part of it has been more significant as it has been about Christian martyrs. As two major religious minorities in Iran, Armenians and Assyrians have also been among Revolutionary demonstrators who toppled Shah and also among combatants who bravely fought against Saddam Hussein’s army during eight years of war to defend the Islamic Republic of Iran. About a year ago, a book titled as “Christ in the Night of Glory” was published in Iran which narrated the stories of several meetings of Ayatollah Khamenei with families of Christian martyrs. The book tells the story of visits made by Ayatollah Khamenei since 1984 when he was president of the time until early 2011 to the time of his leadership. The interesting point about the meetings is the surprising nature of it and the reaction of hosts when they realize that the Leader will go to their homes in few minutes. Each story begins with a short introduction of the martyr and then comes to the visit and the conversations made between the Leader of the Islamic Revolution and the martyr’s family members. This narrative theme actually makes the book more interesting and makes it a must-read. Now, nearly a year after its publication, and with Christmas and New Year time, and after a recent visit by Leader of the Revolution to an Assyrian martyr’s home, a translation of the book into English is published. “We cannot describe the incredible atmosphere of these intimate, affectionate, kind and emotional meetings in a few words; one must read them all. We may, however, say that the readers often find, when reading them, that tears fill their eyes: they are not tears of pity but of human love, admiration, empathy and appreciation,” describes English translator of the book Fazlollah Nikayin, continuing that “the other outstanding feature of these meetings is that most often the grief-stricken atmosphere in the house gradually changes and the bereaved family members, especially the mothers of the martyrs, are really consoled and feel a greater pride for their sons who fought and died for a patriotic, rightful cause.” According to the publisher, this translation into English from the original Persian will be sent to Armenia, Lebanon, Europe and the USA for the further knowledge of Armenians (and Assyrians) who were living in Iran since ancient times. Meanwhile, a number of the narrations and stories of the book along with their photos can be read on the website of it at www.sahbabooks.com.