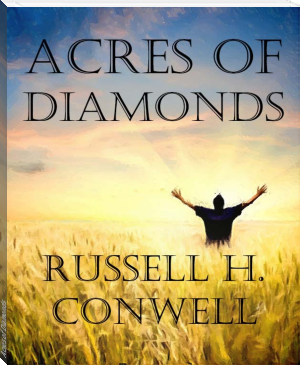 Acres of Diamonds by Russell H. Conwell. One of the books that started a self-help era of literature.

One need not look elsewhere for opportunity, achievement, or fortune—the resources to achieve all good things are present in one's own community. This is developed by an anecdote, credited to an Arab guide, about a man who wanted to find diamonds so badly that he sold his property and went off in futile search for them. The new owner of his home discovered that a rich diamond mine was located right there on the property. Conwell elaborates on the theme through examples of success, genius, service, or other virtues involving ordinary Americans contemporary to his audience: "dig in your own backyard!".

One of the most interesting Americans who lived in 19th century was a man by the name of Russell Herman Conwell. He was born in 1843 and lived until 1925. This story does not get old...it will be true forever.... Opportunity does not just "come along". It is there all the time - we just have to see it.