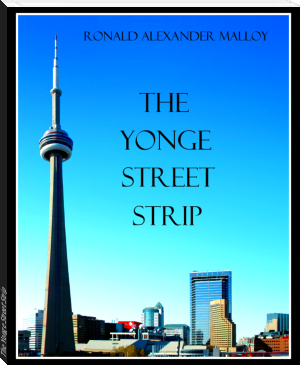 A 40 Chapter, fast-moving drama centered within Toronto’s Downtown Core in the mid 1980’s; several years after the 1970’s Massage Parlor Era is phased out! As a consequence of mysterious deaths related to the Yonge Street Strip; its initial cause is mysterious! Initially defined as somewhat related to recent epidemics - but far more worrisome inasmuch as it evolves into a ‘Sudden-Death Syndrome’. Whatever it be its source; such symptoms appear to affect the more ‘street-wise’ generally-engaged in characteristic sub-cultural activities; perhaps even a release of ‘bad home-made drugs’?
The City Morgue soon contains several victims - many of whom are therein stored awaiting identification! Also rapidly rising so-close upon an “Acquired Immune Deficiency Syndrome” the medical profession - fearing another potential epidemic - so as to avoid any potential public-oriented-panic - has a need for ‘secrecy’. During an all-out Nation-wide effort to identify the source, its potential dangers are ‘prematurely-released’. Authorities concerned over the consequence of there yet being another epidemic so close upon the heels of both the Hepatitis, Herpes and Aids scares, intending only to withhold incidents until some “Cause” can be discerned - an undesired effect sets in - the Media is alerted thereby inciting a series of clandestine activities.
Within these chapters there are several dramatic sub-plots featuring acts of ‘pure vengeance’ that escalate into a sequence of murders; in which violent confrontation among various ‘Constabulary’ levels also erupts.
Weaved into this intrigue is a major RCMP Drug Enforcement ‘under-cover investigation’ entirely-independent of Metro cops and which also becomes both hindrance and help.
Several colorful characters are built into this drama involving the Metro Police; featuring Arnie Fuller - a Uniformed Officer who develops a close association with Dr. Carl Sylinski - Medical Research Specialist; both share center stage as the book’s main characters. As the plot thickens, Fuller is mostly pitted up against his arch-foes - Homicide Detectives Joseph Mancuso and Detective Bruno Ferrani; in this exchange of both personal and professional personalities, Fuller often fares 2nd best.
Long before Epidemiologist, Carl Sylinski, can arrive at a solution to the mysterious deaths - the “Yonge Street Strip” gradually-becomes “Stripped” of patrons. The disease - one that will be given a title, cause and cure before the story ends - is defined as ‘an elusive microorganism continuously present within the human population’; and which can become ‘viral’ under certain conditions; it drawing its menace to humankind from a non-human reservoir becoming a ‘microbe’ able to ‘transmigrate’ to humans”! Sylinski, assisted by dedicated researchers across the U.S. and Canada eventually discovers the source; he then defines as a “chameleon virus”! Adding a touch of substance is a taste of ‘romance and tragedy’ - mixed within a wisp of philosophy.