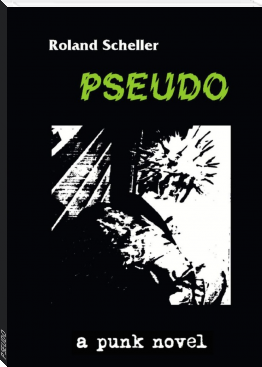 In the middle of the night a taxi driver noticed a rumbling noise under his car during an empty ride. Whilst traveling down Fördestrasse, the taxi had caught a body on the road and dragged it along for almost twenty metres. The man on the street was already dead by that time. It was likely that another vehicle had run him over at the place where hitchhikers used to stand. For years, undesirable hitchhikers had been intimidated here with gestures and steering manoevers. Was it the brainless fascist skinheads again, who already before went on a manhunt in their car on the bicycle path towards the Olympic Centre?

A 15-year-old pseudo-punk joins the Kiel punk scene and experiences a blatant and wired time, which culminated in the Hanover Chaos Days 1983. It is puzzling why he suddenly joined the new skinhead scene around the wicked ex-punks Gonnrad and the Konz brothers. What got him into it? When the teenager later realises that the first skins are taking on right-wing radical tendencies, he tries to break away from the scene, but that doesn't turn out to be that easy. Finally he pulls the ripcord after another incident, even if he would have liked to remain a skinhead – England-style and working-class just like in the beginning. He manages to get out after a brutal fight with Stidi, one of the chief skins. The price is high. His face is smashed and his reputation ruined. Many punks are resentful and can't forgive him for the excursion into the strange world of skinheads. Even for the skins it is not over and done with yet. There is massive trouble on both sides.

It was the madness of the 80s, a time full of self-destructive punks, scolding old Nazis, marauding skinheads and streetclubs, aspiring young Nazis and overtaxed policemen at the Chaos Days.

After a crime against a rocker, a disoriented skinhead ended up at a New Year's Eve party of ordinary people:

I remember there was a lot of light in the flat. The bright light and the white wallpaper hurt in my eyes. In my booze state I scribbled something on the white wallpaper in the hallway: Oi! Oi! Oi!, the battle cry of the skinheads. But I was afraid that this could be brought back to us, and I painted a T before: Toi! Toi! Toi!