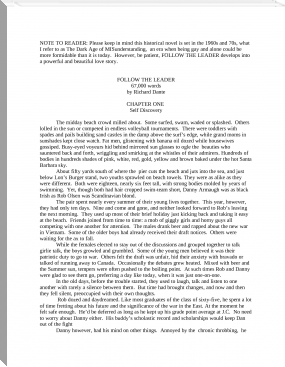 Please keep in mind this emotion charged gay novel is set in the 1960s and 70s, the Vietnam War/ Harvey Milk years, when being gay was more dangerous than it is today.

Following graduation from Santa Barbara High School with the class of ‘65, Danny Armaugh and Rob Olsen discover their lifelong friendship has escalated to something far more than brotherly love. Fear of rejection prevents them from confessing their true feeling s for one another. At first, Danny suppressed his own homosexuality, while Rob masked his sexual preference in the guise of a macho ladies’ man.
Following Danny's disturbing self discovery, Rob takes off for his summer job at Yosemite. Stuck at home and believing Rob is straight, Danny decides to substitute nightly fantasies for the real thing. Months later, Rob confesses his own love for Danny.
During the joyful two year affair that follows, Danny develops his extraordinary musical talents.
After graduating from Santa Barbara Junior College, at the the height of the Vietnam war, Rob is drafted, and Danny goes on to UC Berkeley. While on Christmas leave in San Francisco, Rob and Danny are joined in a riotous wedding ceremony.
A year after Rob is shipped out to Vietnam, Danny has a horrific nightmare in which he finds Rob's body on the battlefield. Actually Rob is not killed, but wounded in action. Ironically, the Pentagon, attempting to boost public acceptance of their unpopular little war, turns the gay marine into a national hero. In Washington, the president presents him with the Medal of Honor, and back in Santa Barbara there is a triumphant home coming parade.
Though temporarily paralyzed, the hero manages to be sexually active, and the two young men enjoy a passionate love life.
Still in a wheelchair, the ex-marine accompanies Danny back to UC Berkeley to study psychology--with a specialty in homosexual trauma. Urged by Rob, his biggest fan, talented singer-composer Armaugh turns in a triumphant student performance, and is discovered by former child-actor-turned-talent-agent, Paul Connor.
Following a successful audition and contract signing at an important record company in Los Angeles, Paul Connor treats his new protégé and Rob Olsen to dinner. There, the duo meet Connor's lover, the outwardly charming Ralph Noon, an important TV actor. While assisting wheelchair bound Olsen to the men's room. Noon reveals his paranoid tendencies. Suspicious of Danny and Paul Connor's new business relationship, he advises Rob to warn Danny there'll be trouble if he tries to steal Paul from him.
The agent successfully steers Danny into an international career. Awed by the power of his uplifting message, the nation takes him to its heart and makes him a modern folk hero
During a world tour, Danny and his entourage stop in apartheid dominated South Africa. The whites refuse to sell tickets to the blacks and the singer decides to perform only for the native tribes. The Armaugh troupe puts on a rousing show for thousands of natives in a natural amphitheater outside Johannesburg. The Armaugh group is hailed as heroes by the “nonwhites” and condemned by the rejected “whites” who expel Danny and his troop from their country with the warning never to return.
Following a recording session, Paul confesses he's afraid of Ralph Noon, who has threatened to kill him if he strays. Danny invites the agent to move in with them for safety
While Danny is in a recording session. Paul arrives to at Danny and Rob's home, and in a jealous rage Ralph Noon shoots Paul. Noon is arrested for attempted murder while Dan and Rob rush to the hospital. The surgeon holds out little hope for Paul's survival. While awaiting the outcome, country singer, Arnie Armor, another of Paul's clients, joins them.
After the trio spends an all night vigil they are told the agent is out of danger.
Months later, Ralph Noon is brought to trial. With Rob, Danny, a recovering Paul Connor, and Noon family members witnesses, the TV actor is convicted and locked away in a mental facility.
Romance blooms between the country singer, Armor, and his agent, though, like much of Danny's public, Paul harbors some romantic feelings for Danny
As Paul recovers, Danny decides to join Paul and Rob in their fight for gay rights. When he comes out publicly on TV’s MEET THE PRESS, many of Danny's fans turn against him. Undaunted, he joins the leadership of the gay rights movement, and helps pave the way for important legislation.
Danny, Rob and Paul travel the country advocating equality for gays. Against everyone's advice Danny elects to speak at a major labor union convention in Dallas. On the steps of the convention center he's met by Bobby Joe Stark, a leader of the bible belt bigots. In an informal debate covered by TV news, Danny makes a fool of the Baptist minister.
Inside the Dallas convention hall, the union members refuse to listen to Danny’s pleas for equality, and boo him off the stage. During the uproar, a shot rings out. Danny is wounded by a young closeted gay who's confused love with hate. The wound is minor and psychologist Rob convinces the would be assassin all is not as grim as it seems.
Persevering, the Armaugh trio continue working with the country's gay rights leaders. The novel draws to a joyous close with a celebration of the California legislature’s passage of the “Consenting Adults” Bill AB489, and it is signed into law by California’s then Governor Jerry Brown. There is a group wedding ceremony in which Rob and Danny renew their vows and along with others, Paul Connor and Arnie Armors' union is also blessed.

The book sounds interresting, but I can not read this small text. Of course I could enlarge my internet window, but it would make the rest of my open internet windows too big.
please try to edit your book and make it bigger :-)

Can not read this the text is to small
try not to use this size agin.