The Iliad of Homer (Illustrated) 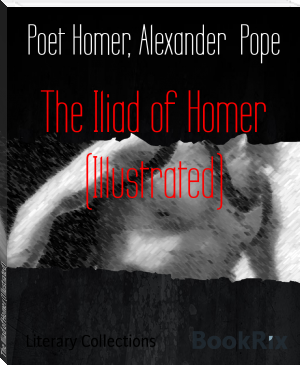 The Iliad (sometimes referred to as the Song of Ilion or Song of Ilium) is an ancient Greek epic poem in dactylic hexameter, traditionally attributed to Homer. Set during the Trojan War, the ten-year siege of the city of Troy (Ilium) by a coalition of Greek states, it tells of the battles and events during the weeks of a quarrel between King Agamemnon and the warrior Achilles.

Although the story covers only a few weeks in the final year of the war, the Iliad mentions or alludes to many of the Greek legends about the siege; the earlier events, such as the gathering of warriors for the siege, the cause of the war, and related concerns tend to appear near the beginning. Then the epic narrative takes up events prophesied for the future, such as Achilles' looming death and the sack of Troy, prefigured and alluded to more and more vividly, so that when it reaches an end, the poem has told a more or less complete tale of the Trojan War.

Alexander Pope (21 May 1688 – 30 May 1744) was an 18th-century English poet, best known for his satirical verse and for his translation of Homer. Famous for his use of the heroic couplet, he is the third-most frequently quoted writer in The Oxford Dictionary of Quotations, after Shakespeare and Tennyson.