A NARRATIVE OF THE AUSTRALASIAN IMPERIAL FORCE AND THEIR ACHIEVEMENT AT ANZAC Von: PHILLIP F. E. SCHULER 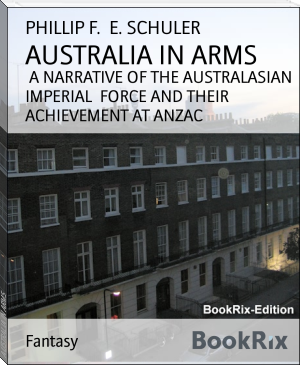 One hot, bright morning early in the Dardanelles campaign, so the story
goes, Lieut.-General Sir William Birdwood was walking up one of the
worn tracks of Anzac that led over the hills into the firing-line when
he stopped, as he very often did on these daily tours of the line,
to talk with two men who were cooking over a fireplace made of shell
cases. General Birdwood wore no jacket, therefore he had no badges of
rank. His cap even lacked gold lace. Under his arm he had tucked a
periscope. But the Australian addressed did not even boast of a shirt.
Stripped to the waist, he was as fine a type of manhood as you might
wish to see. He was burned a deep brown; his uniform consisted of a
cap, shorts, and a pair of boots. His mate was similarly clad.