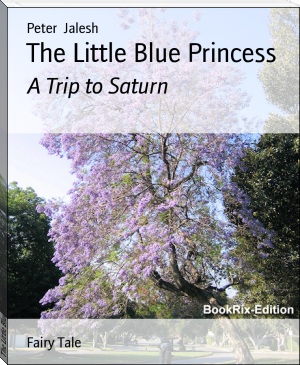 The Little Blue Princess is a story of a “test pilot of an instant time flying machine” that accidentally flies to planet Saturn. A small introduction talks about the author’s childhood, his parents’ By mistake he moves the “flying spot stick” to planet Saturn. In an instant he lands on a Saturn moon called Rhea. The pilot knows that the next favorable angle to return to Earth would occur after 145 days (Earth time). During those 145 days he’d have to survive as best as he can on Rhea moon. When he exits the time flying machine he is received on the ground by a little “blue princess” named Rhea Lu. The princess introduces the pilot to her royal family and gets permission from her parents to accompany the pilot in his endeavors and to help him know what Rhea moon is about. With each chapter that follows we get details about moon’s landscape, animals and flora, and life. The story is narrated by the pilot at the first person. Though, with each chapter the princess presents - like a true tourist guide - the most important aspects of life on Rhea moon. It also introduces the reader to facts about astronomy, botanic and zoology based on her own ideas about nature and life. Details about people living on the moon surface at every step like: the moon is covered by a huge bubble built long time ago. The bubble keeps the temperature on the moon at an acceptable level for life. The next day on his life on the moon the pilot gets a breakfast invitation and is initiated into the moon cuisine which – to the pilot’s disappointment – consists exclusively of crude, sun dried or boiled vegetables. Also he is taken aback by the metallic aspect and taste of the salad leaves. He discovers also that Rhea moon is inhabited by fantastic birds and animals stepping on each other in their rush to grab food. Princess Rhea Lu asked the pilot about “how the music sounds on Earth”. The pilot accompanies her to the time flying machine and plays for her a DVD. “Listening to Mozart’s music Princess Rhea Lu began unexpectedly to cry”. At this moment the story introduces a highly sensitive deviation of the plot towards it final conclusion. “I wish I could compose such music. Mozart is a genius” she said. The princess plants the first seed of her desire to travel to Earth with the pilot and learn to compose Mozartian music. Everything is set for the pilot and the princess to instantly fly to Earth. The reception of both of them on Earth is overwhelming, on the launching pad as well as the conservatory of music.