A Portrait of the Artist as an Anthropomorphic Genius-Machine 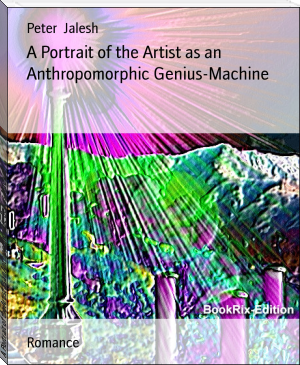 There is no genuine affiliation between Joyce’s book “A Portrait of the Artist as a Young Man” and this book with the exception of the mock title that in the current usage plays the role of a gigantesque pastiche. Joyce’s portraiture genre, superimposed over a restless American landscape, becomes blurred. In reality “A Portrait of the Artist as an Anthropomorphic Genius-Machine” is an antidote to Joyce’s story. In Joyce’s story the characters fold inside the chronicle and become “elements of style”. In “A Portrait of the Artist as an Anthropomorphic Genius-Machine” the characters appear, swell and decay as real living experiences, though mundane. As opposed to Joyce’s super-esthetic and pedantic tale where even the pain is suffered as part of some metaphor, this story tends to show that an American version of it is nothing but a byproduct of a society that is wide enough to gulp down success, happiness, failures, anxiety, malaise and death without affectation. The portrait-story is set in a small town called New Braintree and moves around three school pals – Joe, Walter and Peter - whose lives intersect for the length of the story: Joe, the main character, stands out as a nonconformist genius and a trouble-packed kid. He is living his anger filled childhood as if he was hurled into his own life by forces outside his control. Walter is a “prince” boy, and functions as a counterpoint to Joe. It is as if Walter could act only as long as he is part of this double-portrait, though in essence he’d like to be Joe. Peter is the witnessing chronicler. As opposed to Joe and Walter, he acts always like a thin and unnoticeable shadow. In this trio, Joe is the one who puts a fresh and original spin on teenage happenings and its growing pains. Thus, the story evolves most of the time around Joe’s rebellious personality and his spoiled life, seen him either as a problems ridden child - unable to put his life back in order after his mom dies - or as a teenager that falls prey to drugs and gambling, or, at the end, as a young-man-crusader for lost causes for which he dies. Joe’s case would prove not only that brightness and geniality could be weakened and eventually shattered by recklessness and excessive misbehavior, but also that fate and circumstance are playing sometimes an even more fatal role. Though, after all, there is something very wrong and frightening about a genius, who is nothing but an accident of nature, capable to create chaos and mayhem in his life and the life of the others due to a huge imbalance between a swamped brain and the limited degree of freedom he can use on a daily bases to participate in a life experience. Always struggling, either battling lonely the faceless enemy surfacing on his brain or real characters that mess up his youth years, Joe projects the strange feeling that he is living all his life inside an unresolved teenage crisis. His portrait is a suite of rebellious acts leading up to inhospitable consequences and death.