In Paradise A Novel. Vol. I. 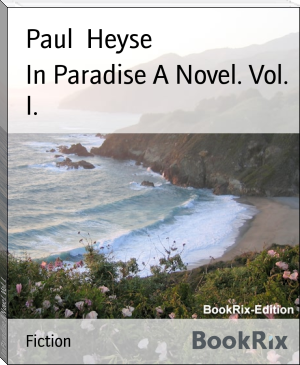 Paul Johann Ludwig von Heyse (15 March 1830 – 2 April 1914) was a distinguished German writer and translator. A member of two important literary societies, theTunnel über der Spree in Berlin and Die Krokodile in Munich, he wrote novels, poetry, 177 short stories, and about sixty dramas. The sum of Heyse's many and varied productions made him a dominant figure among German men of letters. He was awarded the Nobel Prize for Literature in 1910 "as a tribute to the consummate artistry, permeated with idealism, which he has demonstrated during his long productive career as a lyric poet, dramatist, novelist and writer of world-renowned short stories." Wirsen, one of the Nobel judges, said that "Germany has not had a greater literary genius since Goethe." Heyse is the fourth oldest laureate in literature, after Doris Lessing, Theodor Mommsen and Jaroslav Seifert, and the first Jewish Nobel laureate.