Hindoo Tales Or, The Adventures of Ten Princes 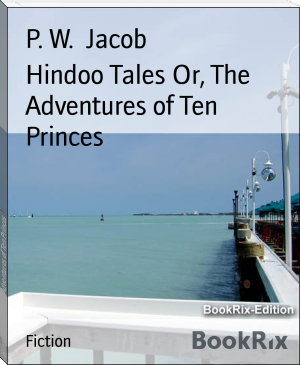 The Sanscrit work entitled "Dasakumaracharitam, or the Adventures of Ten Princes," though printed more than twenty-five years ago, has not, as far as I can ascertain, been translated into any European language. Many parts of it are written in such a turgid "Oriental" style, that a close translation would be quite unsuitable to the English reader. Such passages have therefore been much condensed; others, which are hardly decent—or, as in the speech of the parasite in the last story, tedious and uninteresting, have been omitted; but in general the original has been pretty closely adhered to, and nothing has been added to it.

The exact date of the composition of the "Dasakumaracharitam" is not known. It is supposed to have been written about the end of the eleventh century, and was left unfinished by the author; but as the story of the last narrator is almost finished, not much could have been wanting to complete the work, and the reader may easily imagine what the conclusion would have been.

Some of the incidents correspond with those of the "Arabian Nights," but the stories on the whole are quite different from anything found there, and give a lively picture of Hindoo manners and morals. Unscrupulous deception, ready invention, extreme credulity and superstition, and disregard of human life, are strongly illustrated.

The belief in the power of penance, which was supposed to confer on the person practising it not merely personal sanctity, but even great supernatural powers, was very generally entertained among the Hindoos, and is often alluded to here; as is also transmigration, or the birth of the soul after death in a new body, human or brute. Sufferings or misfortunes are attributed to sins committed in a former existence, and in more than one story two persons are supposed to recollect having many years before lived together as husband and wife.

Much use also is made of the agency of supernatural beings; for besides numerous gods, the Hindoos believe, or at least believed, in the existence of innumerable beings, in some degree immortal, but liable to be killed even by men, swarming in the air, generally invisible, but sometimes assuming a human or a more terrible form; occasionally beneficent, but more commonly injurious to human beings.

At the time when the original work was written, India appears to have been divided into a large number of small kingdoms or principalities, the rulers of which are here termed "Râja," a word almost adopted into our language, but which. I have rendered by the equivalent and more familiar term "King."

The numerous uncouth names, which cannot well be shortened or translated, will, it is feared, cause some annoyance to the reader. As many as possible have been omitted, and of those which occur a list is given in the Appendix, together with a few terms which seemed to require explanation. This will save the reader the trouble of, referring, when a name recurs, to the place where it is first mentioned in order