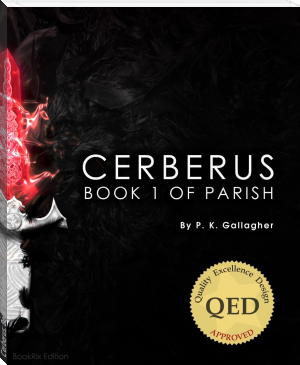 For Kaeden Parish, life in Solace has always followed certain rules—everything makes sense, everything can be planned for, and everything is as it seems. Unfortunately, the secret harbored by his gorgeous, albeit guarded girlfriend is about to shatter all of that.

After a successful attack on his life opens his eyes to a world of war, shadows, and supernatural creatures—a world he didn’t plan for—Kaeden finds himself resembling the sort of monster he has always feared. As he desperately struggles to resist a new temptation, danger draws ever nearer, threatening the ones he loves most. A prophecy tells of a final battle and great destruction, and Kaeden must decide which side he is on, a choice that could mean the end of the world.

In Book 1 of the Solace Series, P.K. Gallagher pulls readers into a realm where good and evil are at war, and the outcome of it all rests on one young man’s decision to either go and live...or stay and die.

This is where Parish begins.

Dude, cool vibes, like real deep, got me straining the braincell, though I will probably re-read it as you probably know I am real slow with it, like proper wicked writing though. And wicked you got Kaedan's other half named as a big up to Genesis, I dig that!!!

Lol, don't strain your brain cells--you'll need those! Glad you enjoyed the read, though :).

i love this,(I cant buy it though) you are a great writer

i wish i was a good writer like you

Aw, I'm flattered, but I've no doubts that if you keep at it, you can surpass me. There's always room for improvement if you really want to :)

I loved this book.... What's the next one called & is it published yet? Because I want to read more

Really? I'm so glad :). Book 2 is called Receptica, but unfortunately, I haven't even started it yet. I'd had half a mind to abandon this project not too long ago, so the sequel just kind of took the back burner. The fact that people like it definitely makes me want to start up again, though :)

I think we have in our midst one of those potentially brilliant writers. This is a long one for Bookrix, but already I'm amazed.

Oh wow, thank you! I feel a little self-conscious now, though, like I need to go back and read through everything to make sure all is order. I'd hate to disappoint you as that's quite flattering coming from you. I just started Closer to Heaven and was very much wowed. :)

Often times you can tell the quality of a book after having read only a page or two. You are one of those authors who knows how to capture a reader with words and images in those opening pages.

Well I'm thrilled to hear you think so. This is about the fifth draft of the story that was written exclusively to fine-tune the opening. Pacing problems attempt to undermine me at every turn, but I do my best to keep them at bay :).

Oh my! Lol, that's the most dramatic reaction the book has gotten so far :). I'll take that to mean you enjoyed it?

I'm afraid that's the end of Book 1, though. Book 2 is still in pre-production. I'll make sure to let you know first when it's started, though ^_^.

Oh why thank you :). I'd be forever grateful if you did!

Wow - I just started reading this - it's great! Are you going to enter it in the YA Contest???

If not, you definitely need to publish this! When will the next part of the series be available?