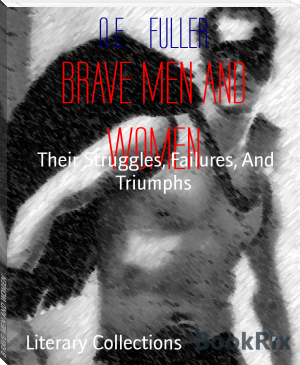 By O.E. FULLER
1884
All rights reserved.
Struggle, failure, triumph: while triumph is the thing sought, struggle
has its joy, and failure is not without its uses.

"It is not the _goal_," says Jean Paul, "but the _course_ which makes us
happy." The law of life is what a great orator affirmed of
oratory--"Action, action, action!" As soon as one point is gained,
another, and another presents itself.

"It is a mistake," says Samuel Smiles, "to suppose that men succeed
through success; they much oftener succeed through failure." He cites,
among others, the example of Cowper, who, through his diffidence and
shyness, broke down when pleading his first cause, and lived to revive
the poetic art in England; and that of Goldsmith, who failed in passing
as a surgeon, and yet wrote the "Deserted Village" and the "Vicar of
Wakefield." Even when one turns to no new course, how many failures, as
a rule, mark the way to triumph, and brand into life, as with a hot
iron, the lessons of defeat!

The brave man or the brave woman is one who looks life in the eye, and
says: "God helping me, I am going to realize the best possibilities of
my nature, by calling into action the beneficent laws which govern and
determine the development of each individual member of the race." And
the failures of such a person are the jewels of triumph; that triumph
which is certain in the sight of heaven, if not in the eyes of men.

"Brave Men and Women," the title of this volume, is used in a double
sense, as referring not only to those whose words and deeds are here
recorded, or cited as examples, but also to all who read the book, and
are striving after the riches of character.