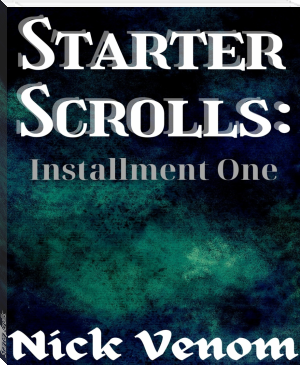 “Help! Arrrgh!” Someone from the cockpit shouted. “Heeeellllpppp!” His screams were blood-curdling, frightening the passengers and staff. Aviana, who was the nearest staff member to the cockpit, approached it. She rattled her knuckles on the door, asking if everything was okay.

“Heeeellllllpppp mmmeee!” The co-pilot screamed as the plane nose-dived. It became chaotic as the plane descended at a horrific speed. Everything then went silent for a split second as Kyle turned to look at Emma who had on a horrified expression. It turned dark after that.

The Day The World Broke: Chapter One - Welcome To The Family

Justin made his way towards the other side of the block, ducking and jumping into bushes and other vegetation to escape the Roamers’ sight. Even without his intense camouflage, the Roamers didn’t bat a single eyelid at him.

“Strange,” He muttered out loud. His voice was quiet, his words coming out as a small whisper, Even so, it attracted a nearby Roamer. The Roamer turned his head to Justin. He noticed that the Roamer, which resembled a stereotypical zombie, had its eyes gouged out. It couldn’t see him, but its hearing ability remained the same; maybe, even increased.

Justin decided to act on his theory, stepping into the fleeting daylight as ten Roamers surrounded him. The Roamers took notice of the grass being chomped on by Justin’s sneakers but never of him. They ignored him, continuing as if nothing was out of the ordinary. As if Roamers knew what ordinary was.

With his theory confirmed, he quietly made his way off the lawn and towards the Clancy family’s car; a beaten-up red pick-up. The truck was old and deteriorating but still had its fighting spirit. Unfortunately, Justin was on the way to damage the remnants of its spirit.

Infection: Episode One - The Apocalypse {Season One}

“What’s wrong?” Ashley whispered, peering over his shoulder at the horrific sight. Her eyes widened, taking in the sight of the corpse and the single eyeball staring at them.

She turned around, retching. She had no fluids to spare for vomit.

“Shhh, stop.” He whispered, keeping his eyes on the zombie in front of him. It stopped mid-chew, looking up. It turned his head slowly, staring creepily at Rin. Chills ran through his body, shaking him.

Ashley finished retching, turning her head to face the zombie. It had noticed the both of them, slowly rising. However, it idled in one spot, its jaw dislocating. It let out a loud shriek before stopping then shrieking again. It repeated the process of letting out a few-second shriek before silencing itself then letting out the same shriek again.

Rin stumbled backward, gripping the M1911 tightly. He turned around, hearing a stampede of feet trudging towards him from the hallway he passed by. He turned towards Ashley, who shared a frightened look with him.

He quickly walked over to the first hallway, peering down it and confirming his fears. The zombies had heard the zombie, which Rin quickly dubbed as a Siren, and was now trudging towards them.