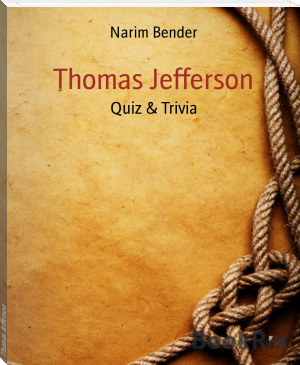 Are you the smart enough?

Do you know the answers to these questions:

What was Jefferson's background?
Which university did Jefferson found?
Did Thomas Jefferson have an affair with one of his slaves?
How did Sally Hemmings come into Jefferson's attention?
Jefferson's wife, Martha, known as Patty, died in 1782. Jefferson was 39 years old. Why did he never remarry?
Thomas Jefferson would serve as ambassador to France during George Washington's tenure. Name the French lady that he would become involved with.
Where is the original tombstone of Jefferson's grave?

Do you know that:

These are just a handful of the questions and answers you'll find in the book " Thomas Jefferson: Quiz & Trivia". Use these questions for entertainment at home, for compiling your own quiz events, for any events or just to test your own knowledge. There are one ready made Quiz with questions and answers. Enjoy quizzing yourself and others. As an additional bonus, you'll also receive 61 trivia facts. By putting together a trivia and quiz makes learning more fun.