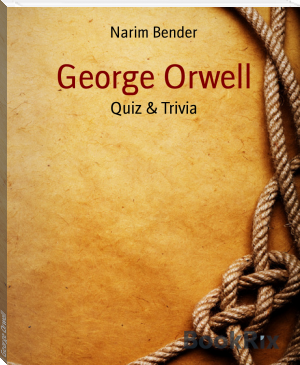 Are you the smart enough? Do you know the answers to these questions:

Do you know that:

Orwell was a socialist.
Orwell had a real-life fascination with rats.
Orwell chose his pen name, "George Orwell" because "George" was the patron saint of England and "Orwell" was the name of a river he liked.
In the 40’s Orwell met Earnest Hemingway, who lent him Colt .32 pistol.
Orwell spoke several languages, including French, Spanish, English, Latin and Greek.
Room 101 in '"1984"', a nightmarish room where the individual's worst fear comes true, was named after a conference room at the BBC where Orwell had to sit through meetings he found boring.

These are just a handful of the questions and answers you'll find in the book "George Orwell: Quiz & Trivia". Use these questions for entertainment at home, for compiling your own quiz events, for any events or just to test your own knowledge. There are one ready made Quiz in total with 60 questions and answers. Enjoy quizzing yourself and others. As an additional bonus, you'll also receive 60 trivia facts. By putting together a trivia and quiz makes learning more fun.