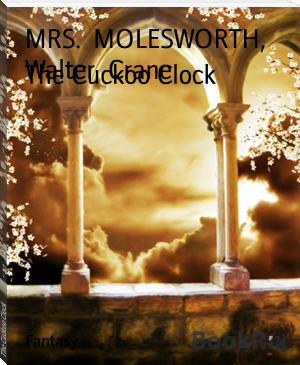 The Cuckoo Clock, by Mary Louisa Molesworth, is a British children’s fantasy novel published in 1877.[1] A small child and a cuckoo for a cuckoo clock become unlikely friends, when at night the clock transports her to magical places.
A young girl (Griselda) is sent to live with her two older aunts (Miss Grizzel & Miss Tabitha.) The house is large but in the room where she completes her lessons there is a very elaborate cuckoo clock. During one of her lessons Griselda gets very mad, thinking the clock is mocking her, and throws a book at the Cuckoo. The clock stops working, and the two aunts are devastated. Even though the clock seems to be silent, Griselda still hears it calling to her at night. She then decides that if the Cuckoo comes back at all she will catch him. In the middle of the night she goes to observe the Cuckoo. She then apologizes. When she does apologize the cuckoo comes to life and starts to talk with Griselda. The next day the Cuckoo is fixed. The next night however, the Cuckoo is calling to her again. The cuckoo asks her where she would like to go, she immediately responds with Fairyland. The cuckoo interjects that too many children have been there and that she should choose somewhere else. He suggests The Land of the Nodding Mandarin. She agrees. They journey to the land, and venture to see a palace and they get to nod at the king of the land, himself. After their journey she awakes in her bedroom, but she is still wearing the shoes that she received from the Mandarin land. Griselda then comes down with a cold, and instead of journeying to a land Griselda gets to look at pictures. The cuckoo hums her to sleep and she then receives different visions of her relatives. She also learns that her Grandfather is the one who made the Cuckoo Clock.

One cold night the cuckoo comes to her room and invites her to join him in the garden. Confused, Griselda says no. She then realizes that it might not be the garden that is just outside. She then runs to the clock trying to convince the cuckoo that she would like to go. She turns around three times and opens her eyes to Butterfly-land. They are invited to a high banquet by the king and queen of the butterflies. She learns that the butterflies are very hard workers and they gift her with a bit of their fragrance.

Some time passes and the young girl can hear the Cuckoo calling again. This time the call is actually for another little boy, Master Phil. Master Phil is a little boy of five and is searching for the cuckoo. He happens upon Griselda, and they talk of the cuckoo. He wants to find the Cuckoo so that he will be taken to fairyland. Griselda offers to teach him all that she knows. They play for the rest of the day and then plan on meeting the next day as well. The both aunts are not happy that there was a boy on the grounds. There were also not happy that Griselda played with him. She goes to sleep saddened, but is soon wakened up by her maid (Dorcas) to the good news that the two aunts