Quadrupeds, What They Are And Where Found 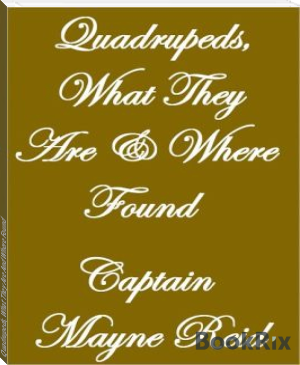 Thomas Mayne Reid (April 4, 1818 – October 22, 1883), was a Scots-Irish American novelist. "Captain" Reid wrote many adventure novels akin to those written by Frederick Marryat and Robert Louis Stevenson. He was a great admirer of Lord Byron. These novels contain action that takes place primarily in untamed settings: the American West, Mexico, South Africa, the Himalayas, and Jamaica.

Biography Reid was born in Ballyroney, a small hamlet near Katesbridge, County Down, in the north of Ireland, the son of Rev. Thomas Mayne Reid Sr., who was a senior clerk of the General Assembly of the Presbyterian Church in Ireland. His father wanted him to become a Presbyterian minister, so in September 1834 he enrolled at the Royal Belfast Academical Institution. Although he stayed for four years, he could not motivate himself enough to complete his studies and receive a degree. He headed back home to Ballyroney to teach school.

In December 1839 he boarded the Dumfriesshire bound for New Orleans, Louisiana, arriving in January 1840. Shortly afterward he found a job as a clerk for corn factor, or trader in the corn market. He stayed in New Orleans for six months. It is said that he left his position for refusing to whip slaves. (Reid later used Louisiana as the setting of one of his best-selling books, an anti-slavery novel entitled The Quadroon.)

From New Orleans, Reid traveled to Tennessee. On a plantation near Nashville, he tutored the children of Dr. Peyton Robertson, who some Reid biographers have confused with the Doctor's father, General James Randolph Robertson. (Some twenty years later, Reid would make mid-Tennessee the setting for his novel The Wild Huntress.) Following Dr. Robertson's death, Reid founded a short-lived private school in Nashville. In 1841 he found work as a clerk for a provision dealer in either Natchez, Mississippi or Natchitoches, Louisiana (the latter place seems more likely). Although Reid later claimed to have made several trips to the West during this period of his life (on which he purportedly based some of his novels), the evidence for such journeys is sketchy and confusing at best.