Mario and the Koopa Conspiracy 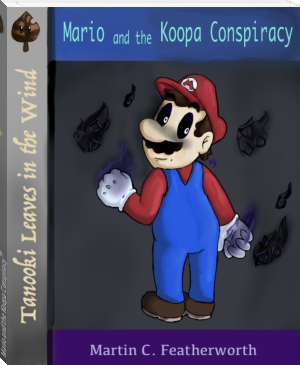 Tanooki Leaves in the Wind is a series of stories set in the Super Mario universe.

In this series, Mario is depressed and becoming slowly suicidal while his friends try to help him. But, just like in the games, Bowser comes along and ruins everything again. Or was it really Bowser?

The gang gets sucked up into a wild scheme that is only begining to unfold. Twists and turns, time-travel and alternate dimensions await them at every corner... All of which are the perfect distraction for Mario as he tries to make himself better.

In this story, Mario starts out on vacation at the Sea Slide, where he tries to relax and forget his problems. Unfortunately, it does not work. He returns to his Mushroom Kingdom home still feeling as empty as when he left.

Yoshi, Princess Peach, and Luigi catch him later as he is trying to kill himself. Just as they rescue him, Bowser crashes the scene, kidnapping Peach once again! Mario sets off in a fit for the castle where she is being kept...

This series is discontinued until further notice on account of Super Mario Odyssey. I may resume this at some point in the future, but I'll probably completely change aspects about Mario's personality and the Super Mario Universe. Sorry! I don't even believe my own theories anymore! :( I'm not taking it down yet, though.

Martin C. Featherworth is my pen name for this series.

Good Job! How many more books in the series?

I really don't know yet. At least two or three for sure. I'm writing the second now. I'm glad you like it! :)

I think something you portray perfectly is his inner conflict, and sadly, I can relate.

Thank you! And yeah, I've been there. That's really how I've been able to write about it at all. Experience and the fact that I really love Mario games.