Twenty-six and One and Other Stories 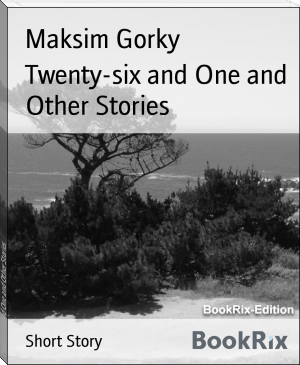 Russian literature, which for half a century has abounded in happy
surprises, has again made manifest its wonderful power of innovation.
A tramp, Maxime Gorky, lacking in all systematic training, has suddenly
forced his way into its sacred domain, and brought thither the fresh
spontaneity of his thoughts and character. Nothing as individual or as
new has been produced since the first novels of Tolstoy. His work owes
nothing to its predecessors; it stands apart and alone. It, therefore,
obtains more than an artistic success, it causes a real revolution.

Gorky was born of humble people, at Nizhni-Novgorod, in 1868 or
1869,--he does not know which--and was early left an orphan. He was
apprenticed to a shoemaker, but ran away, a sedentary life not being to
his taste. He left an engraver's in the same manner, and then went to
work with a painter of _ikoni_, or holy pictures. He is next found to
be a cook's boy, then an assistant to a gardener. He tried life in
these diverse ways, and not one of them pleased him. Until his
fifteenth year, he had only had the time to learn to read a little; his
grandfather taught him to read a prayer-book in the old Slav dialect.
He retained from his first studies only a distaste for anything printed
until the time when, cook's boy on board a steam-boat, he was initiated
by the chief cook into more attractive reading matter. Gogol, Glebe
Ouspenski, Dumas _pere_ were revelations to him. His imagination took
fire; he was seized with a "fierce desire" for instruction. He set out
for Kazan, "as though a poor child could receive instruction
gratuitously," but he soon perceived that "it was contrary to custom."
Discouraged, he became a baker's boy with the wages of three rubles
(about $1.50) a month. In the midst of worse fatigue and ruder
privations, he always recalls the bakery of Kazan with peculiar
bitterness; later, in his story, "Twenty-Six and One," he utilized this
painful remembrance: "There were twenty-six of us--twenty-six living
machines, locked up in a damp cellar, where we patted dough from
morning till night, making biscuits and cakes. The windows of our
cellar looked out into a ditch, which was covered with bricks grown
green from dampness, the window frames were obstructed from the outside
by a dense iron netting, and the light of the sun could not peep in
through the panes, which were covered with flour dust. . . ."

Gorky dreamed of the free air. He abandoned the bakery. Always
reading, studying feverishly, drinking with vagrants, expending his
strength in every possible manner, he is one day at work in a saw-mill,
another, 'longshoreman on the quays. . . . In 1888, seized with
despair, he attempted to kill himself. "I was," said he, "as ill as I
could be, and I continued to live to sell apples. . . ." He afterward
became a gate-keeper and later retailed _kvass_ in the streets. A
happy chance brought him to the notice of a lawyer, who interested
himself in him, directed h