MEMOIRS OF THE COURT OF MARIE ANTOINETTE 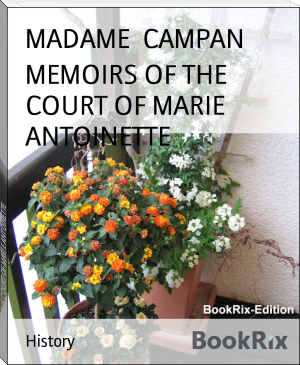 Jeanne Louise Henriette Campan (née Genet; 6 October[1] 1752, Paris – 16 March 1822, Mantes) was a French educator, writer and lady-in-waiting. In the service of Marie Antoinette before and during the French Revolution, she was afterwards headmistress of the first "Maison d'éducation de la Légion d'honneur", as appointed by Napoleon in 1807.

Her father was the highest-ranking clerk in the foreign office (the ambassador Citizen Genet was her younger brother), and, although without fortune, placed her in the most cultivated society. By the age of fifteen she could speak English and Italian, and had gained so high a reputation for her academic accomplishments as to be appointed reader to Louis XV's daughters (Princesses Victoire, Sophie and Louise) in 1768, and lady-in-waiting to Marie Antoinette in 1770. She was a general favourite at court, and when in 1774 she bestowed her hand upon Monsieur Campan, son of the secretary of the royal cabinet, the king gave her an annuity of 5,000 livres as dowry. The marriage was unhappy and the couple separated in 1790. Madame Campan was made First Lady of the Bedchamber by Marie Antoinette in 1786; and she continued to attend on her until the storming of the Tuileries on 10 August 1792, in which she was forcibly separated from the queen. With her own house under attack on this occasion, Henriette sought asylum in the countryside.

She survived the dangers of the Terror, but after the 9th of Thermidor, finding herself almost penniless, and being thrown on her own resources by the illness of her spouse, Madame Campan determined to support herself by establishing a school at St Germain. The institution prospered, and was patronized by Hortense de Beauharnais, whose influence led to the appointment of Madame Campan as superintendent of the academy founded by Napoleon at Écouen for the education of the daughters and sisters of members of his Légion d'honneur in 1807. She held this post until it was abolished at the restoration of the Bourbons in 1814, when she retired to Mantes, where she spent the rest of her life amid the kind attentions of affectionate friends, but saddened by the loss of her only son, and by the calumnies circulated on account of her connexion with the Bonapartes.

Henriette Campan died in 1822, leaving valuable Memoirs of the Private Life of Marie Antoinette (published 1823 (posthumously), Paris, 3 vols.), subtitled To which are Added Personal Recollections Illustrative of the Reigns of Louis XIV, Louis XV, and Louis XVI (French: Mémoires sur la vie privée de Marie Antoinette, suivis de souvenirs et anecdotes historiques sur les règnes de Louis XIV – XV); a treatise De l'Education des Femmes (pub. 1824); and one or two small didactic works, written in a clear and natural style. The most noteworthy thing in her educational system, and that which especially recommended it to Napoleon, was the place given to domestic economy in the education of girls. At Écouen the pupils underwent a complete trai

It is so great to find this book !