A Journey to Katmandu

(the Capital of Napaul), with The Camp of Jung Bahadoor; including A Sketch of the Nepaulese Ambassador at Home Von: Laurence Oliphant 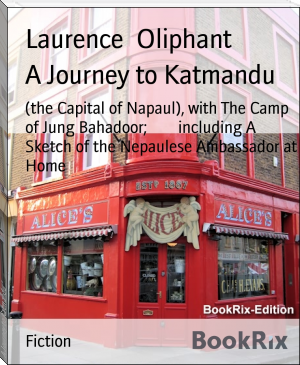 Laurence Oliphant was the only child of Sir Anthony Oliphant (1793–1859), a member of the Scottish landed gentry and his wife Maria. At the time of his son's birth Sir Anthony was Attorney General of the Cape Colony, but he was soon appointed Chief Justice in Ceylon. Laurence spent his early childhood in Colombo, where his father purchased a home called Alcove in Captains Gardens, subsequently known as Maha Nuge Gardens. Sir Anthony and his son have been credited with bringing tea to Ceylon and growing 30 tea plants brought over from China on the Oliphant Estate in Nuwara Eliya.[1] In 1848 and 1849, he and his parents toured Europe. In 1851, he accompanied Jung Bahadur fromColombo to Nepal, which provided the material for his first book, A Journey to Katmandu (1852). Oliphant returned to Ceylon and from there went to England to study law. Oliphant left his legal studies to travel in Russia. The outcome of that tour was his book, The Russian Shores of the Black Sea (1853).