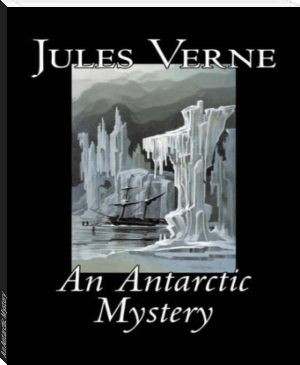 An Antarctic Mystery is a novel by Jules Verne and is a sequel to Edgar Allan Poe's novel The Narrative of Arthur Gordon Pym of Nantucket. It follows the adventures of the narrator and his journey from the Kerguelen Islands aboard Halbrane. The narrator is a wealthy American Jeorling, who has entertained himself with private studies of the wildlife on the Kerguelen Islands and is now looking for a passage back to the USA. Halbrane is one of the first ships to arrive at Kerguelen, and its captain Len Guy somewhat reluctantly agrees to have Jeorling as a passenger as far as Tristan da Cunha.

Underway, they meet a stray iceberg with a dead body on it, which turns out to be a sailor from Jane. A note found with him indicates that he and several others including Jane's captain William Guy had survived the assassination attempt at Tsalal and are still alive. Guy, who had talked to Jeorling earlier about the subject of Pym, reveals himself to be the brother of William Guy. He decides to try to come to the rescue of Jane's crew. After taking on provisions on Tristan da Cunha and the Falklands, they head South with Jeorling still on board. They also take aboard another mysterious sailor named Hunt who is eager to join the search for undisclosed reasons.

The combined crews of Halbrane and Jane decide to try to make it north in their newly acquired boat. They make good progress, until they notice the appearance of strong magnetic forces. They find the source of it, the Ice Sphinx: A huge mountain magnetically "charged" by the particle streams that get focused on the poles through Earth's magnetic field.

Here, they find the remains of Hearne's team, which came to grief when the Ice Sphinx' immense magnetic forces attracted their iron tools and boat components to it and smashed them on its rocks. The boat of Joerling and the others only escaped destruction because, being built by the natives, it contained no iron parts. At the foot of the Sphinx, they also find the body of Pym, who came to death the same way. Peters dies from grief on the same spot. The others embark again in their boat, and finally reach the open ocean and are rescued.