Pancha Forkers and the Egghead Robots 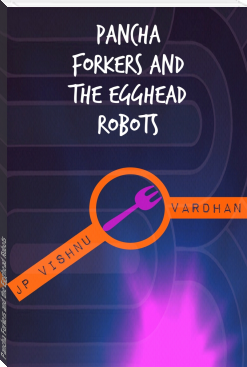 Xobo the Robo, possessed by the evil soul of Mr. God, plans the destruction of Mother Nature to reestablish its fictional alien ancestors system of Fathers and Sons. It raised a Robo Family and demonic Army; they run amok and cause devastation.. Militaries fail against Metal Monsters.. Ultimately, five children with Pure Hearts were chosen to stop Lord Xobo. At last, the War begins.

Quotes from the book:

Lord Xobo - "If there are no plants, no animals, no women, and only reanimated corpses of Fathers and Sons - The Brutons and Kreaks, then a better world, a New World could be created. The human race would have every opportunity to survive without plants, animals and women.

Who knows, we may even go to other galaxies and annihilate plants, animals and women everywhere, until only Fathers and Sons remain in the whole universe. We would sing the glorious smell of putrefied corpses forever and ever."

Uncle Jumbo - "Master Bodhitaran, I'm sorry to say this, but I have no other choice. I could guess what you are going to ask. I shudder to think about those creatures - Brutons and Kreaks. What little children could do against them? Please don't expect me to send these kids to do war against murderous Robots."

Monk Bodhitaran - "No government on Earth has the tech to stand against Xobo and his United Family. Except us. These five children could beat them with the help of these formidable Purple Forks and few of my own magical devices. I'll guide them to victory. Leave them to me, I pledge my life to protect them!"