Notes on Stable Management in India and the Colonies 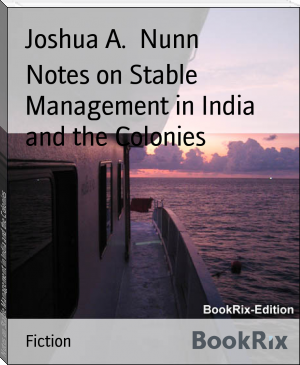 The following notes on Stable Management were originally delivered in a

lecture to the Officers, Non-Commissioned Officers, and Troopers of the

Punjab Light Horse, and as they were considered by the members of the

corps to be useful, at their request I have put them on paper. There is no

attempt at anything beyond the most elementary rudiments of horse-keeping

in India, and all they are intended for is to give volunteers of mounted

corps, who have not previously owned horses, some slight idea as to what

should be done for the care of their chargers, and not leave them entirely