Morning and Evening Prayers for All Days of the Week Together With Confessional, Communion, and Other Prayers and

Hymns for Mornings and Evenings, and Other Occasions Von: John Habermann 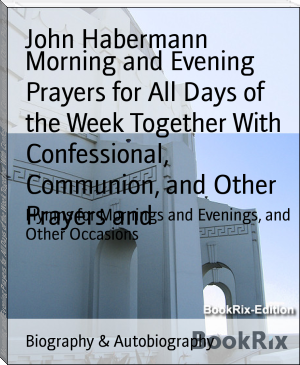 This little manual of prayers herewith offered to English speaking
Christians in their own language, has long been one of the treasures of
the German people. With the exception of a few prayers, as hereinafter
noted, it was originally written by one of God's noblemen, by one who
"lived and moved and had his being" in the things of the Kingdom of God.
Dr. John Habermann (known also as Avenarius,

I love these songs <3