MORNING AND EVENING PRAYERS FOR ALL DAYS OF THE WEEK 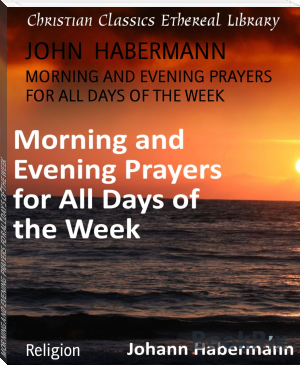 Habermann, praised by his contemporaries as a talented Old Testament exegete, joined the Lutheran church in 1540, just after Martin Luther catalyzed the Protestant movement. In 1565, Habermann published his most important work, Morning and Evening Prayers for All Days of the Week, a prayer-book that assigned prayers for various Christian needs to the days of the week. Within fifteen years after its publication, the book had become widely circulated in Protestant circles, and was available in Latin, English, and French translations. Many contemporary Protestant prayer-books still include some of adapted versions of Habermann’s prayers.