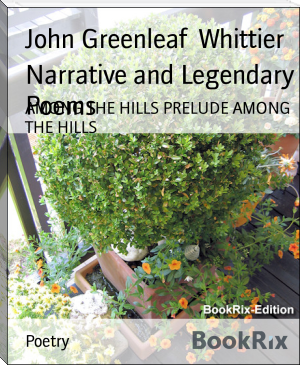 John Greenleaf Whittier (December 17, 1807 – September 7, 1892) was an influential American Quaker poet and ardent advocate of the abolition of slavery in the United States. He is usually listed as one of the Fireside Poets. Whittier was strongly influenced by the Scottish poet Robert Burns. Highly regarded in his lifetime and for a period thereafter, he is now remembered for his poem Snow-Bound, and the words of the hymn Dear Lord and Father of Mankind, from his poem "The Brewing of Soma", frequently sung to the tune "Repton" by Hubert Parry.
Early life and work

John Greenleaf Whittier was born to John and Abigail (Hussey) at their rural homestead in Haverhill, Massachusetts, on December 17, 1807.[1] His middle name is thought to mean 'feuillevert' after his Huguenot forbears.[2] He grew up on the farm in a household with his parents, a brother and two sisters, a maternal aunt and paternal uncle, and a constant flow of visitors and hired hands for the farm. Their farm was not very profitable. There was only enough money to get by. Whittier himself was not cut out for hard farm labor and suffered from bad health and physical frailty his whole life. Although he received little formal education, he was an avid reader who studied his father’s six books on Quakerism until their teachings became the foundation of his ideology. Whittier was heavily influenced by the doctrines of his religion, particularly its stress on humanitarianism, compassion, and social responsibility.

Whittier was first introduced to poetry by a teacher. His sister sent his first poem, "The Exile's Departure", to the Newburyport Free Press without his permission and its editor, William Lloyd Garrison, published it on June 8, 1826.[3] As a boy, it was discovered that Whittier was color-blind when he was unable to see a difference between ripe and unripe strawberries.[4] Garrison as well as another local editor encouraged Whittier to attend the recently opened Haverhill Academy. To raise money to attend the school, Whittier became a shoemaker for a time, and a deal was made to pay part of his tuition with food from the family farm.[5] Before his second term, he earned money to cover tuition by serving as a teacher in a one-room schoolhouse in what is now Merrimac, Massachusetts.[6] He attended Haverhill Academy from 1827 to 1828 and completed a high school education in only two terms.

Garrison gave Whittier the job of editor of the National Philanthropist, a Boston-based temperance weekly. Shortly after a change in management, Garrison reassigned him as editor of the weekly American Manufacturer in Boston.[7] Whittier became an out-spoken critic of President Andrew Jackson, and by 1830 was editor of the prominent New England Weekly Review in Hartford, Connecticut, the most influential Whig journal in New England. In 1833 he published The Song of the Vermonters, 1779, which he had anonymously inserted in The New England Magazine. The poem was erroneously attributed to Ethan Allen