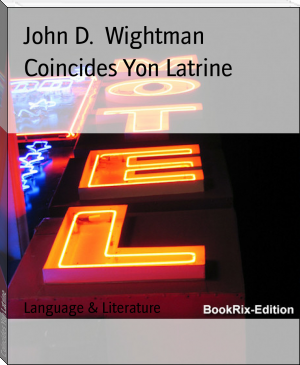 John D. Wightman creates a universe of mirrors in his continuing poetic sequence Coincides Yon Latrine, though not mirrors as reflections so much as translations, with one part of a middle-justified poem responding to one or more other center-justified parts, prey to the same invisible gravity. There is no set procedure—this is an artist's logbook and follows the caprices of the days—but one half usually involves modified translations of writing by Wightman’s poetic and philosophical predecessors (Baudelaire, Horace, Jammu and St. Augustine among others), and the other half is a response which can take on any number of forms of address, including the minimal Creeley-esque lyric, the Longport stew, or, most distinctly, the spontaneously spiritual or religious affirmation, making him sound often like a latter-day Henry Vaughn or, with his prolixity, John Clare.

Trancepilopollianated is a strategically random, though thematically coherent, selection from the ongoing project, a pollifilistic bouquet of sorts of what can be called word sculptures—concrete, they challenge the rectilinear rightness on more than four fronts (multiverse) — or even musical compositions: Wightman, an avid fan of Stockhausen, views all of his text works as scores to an aural, if not conventionally "musical," performance.