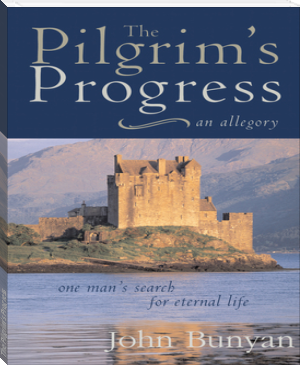 The Pilgrim's Progress from This World to That Which Is to Come; Delivered under the Similitude of a Dream is a Christian allegory written by John Bunyan. Christian, an everyman character, is the protagonist of the allegory, which centres itself in his journey from his hometown, the "City of Destruction" ("this world"), to the "Celestial City" ("that which is to come": Heaven) atop Mt. Zion. Christian is weighed down by a great burden, the knowledge of his sin, which he believed came from his reading "the book in his hand" (the Bible). This burden, which would cause him to sink into Tophet (hell), is so unbearable that Christian must seek deliverance. He meets Evangelist as he is walking out in the fields, who directs him to the "Wicket Gate" for deliverance. Since Christian cannot see the "Wicket Gate" in the distance, Evangelist directs him to go to a "shining light," which Christian thinks he sees. Christian leaves his home, his wife, and children to save himself: he cannot persuade them to accompany him. Obstinate and Pliable go after Christian to bring him back, but Christian refuses. Obstinate returns disgusted, but Pliable is persuaded to go with Christian, hoping to take advantage of the paradise that Christian claims lies at the end of his journey.