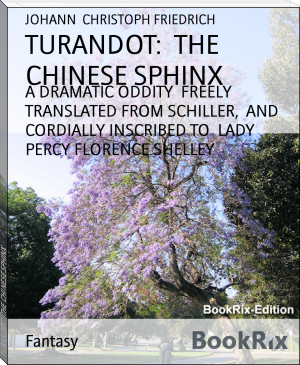 Outskirts of Peking. L. View of town gate, above which
are reared long poles, bearing turbaned and shorn heads, symmetrically
disposed so as to form a kind of architectural ornament.
R. Small suburban dwellings, from one of which issues PRINCE
KALAF, dressed in a fantastic Tartar warrior's costume.

The Gods be thanked, at last by patient seeking,
I've found a lodging in this crowded Peking.

And kicking.
But how escaped you from that fatal licking
The Bey of Tefflis gave us all in battle?
Your father's troops were slaughtered off like cattle,
And you, my Prince, we thought, were slain or taken;
So off I fled to save, at least, _my_ bacon.
I found a refuge in this queer old city;
A widow married me for love--or pity.
We live like happy doves in yonder cot,--
My only grief,--the thought of your sad lot.