FEAR OF THE BEAST 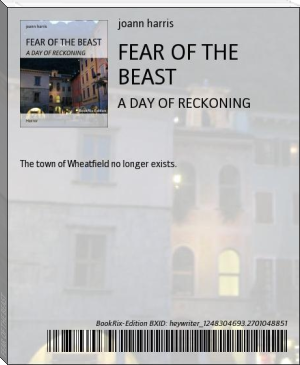 The town of Wheatfield no longer exists. Very little of the northeastern part of Fork County exists, except in the memories of those who may have once lived there and were fortunate enough to be gone when the great fireball struck, searing the land for miles. Scientists were stunned by the suddeness of the huge fireball, fir it seemed to materalized out of the heavens, traveling at such a tremendous speed, it was almost beyond calculation. "Where had it come from?" the scientists were asked by a stunned population. "From straight out of the sun," was the reply. "You could not have predicted it?"No.' Why?" The scientists hedged that question, for many of them were sworn avowed atheists. Finally, one man from an observatory in Washington who was not an unbeliever did reply, although not to the satisfaction of all of his colleagues. His reply brought laughter from more than a few of his fellow scientists.

How does one predict when the hand of God will fall, and how hard the blow will be? If indeed it had been as the scientists said, the hand of God, it had been a mighty slap from him. By the time various spies in the skies satellites, picked up on the cannoading mass of fiery destruction, it was already on top of the satellites, going through them, and burning them before they could be photographed, more than a one second shot at best, and transmit that to earth. Those pictures that did make it back to earth were immediately ordered to be seized by a presidential order.

Some said it was shaped like a Star of David. Others said it looked like an artist's conception of God's face; striking resemblance. The president told the scientists to shut their damn mouths, too, or faced the prospects of never receiving another dime of government money for anything. But many people witnessed the strange blue lights that preceded the crash of the whatever the hell it was, and they asked about those lights. But suddenly all were quiet about the mighty ball of fire, except for speculation. That soon began to fade as the news pushed the holocaust out of the headlines.

Only the insurance companies were left to ponder over the crash and dole out large sums of money to the relatives of those who had been killed. An astronomer in California thought he knew what had happened but he kept his mouth shut not out of any fear of the government, but because he felt it was the right thing to do. One investigative fellow did put some rather interesting and curious events together after a bit of prowling. But since he was a career army reservist and did not wish to spend his summer obligations to Uncle Sam cleaning up gooney bird shit on Guam , he kept his mouth shut.

"Someday, maybe he will write a book about it, and maybe by them he would believe it himself and be assured of the protection of the Dali Lama in some cave in Tibet.

What he had pieced together was that almost at the precise moment of fiery impact with earth, a series of fires leveled a huge man that was seen leaving earth, moving toward the heavens traveling at tremendous speed. No one knew what that thing was or if they did, they weren't saying, and there were some people who still remained unaccounted for after the fire at the mansion.

One of them was a young man by the name of Alex Balloon who was a minister in Wheatfield who had died under very mysterious circumstances back in "52" when another disaster had befallen the tragedy-ridden community, butt the investigative reporter wisely closed his journal on both disasters for a time.

It had been adnormally hot for this late in the season. By this time in the eastern part of Nebraska there was usually a lash of winter's approach in the air, a bit that brought color to the cheeks of pedestrains urgently but softly speaking of the harsh winter just ahead.

But the winds that blew across the plains and rolling sands hills had a torrid touch and brought a sudden surliness to the people of this sparsely populated county, turning most tempers raw and confusing a few as to why. The man knew why.

The few would learn too late. And out in the badlands some miles from Wheatfield , inside a fenced-in area where horror sprang to life back in the late 50's something stirred. A creature cautiously stuck its head out of the hidden cave and looked around, viewing its surrounding through evil, red eyes. The beast had felt the hot fingers of the wind pushing through the cave entrance as a probing hand might do, signaling those which serve another master that it was time.

The Dark One was near. The wind grew in strength and heat the beast snarling in reply. The manlike creature rose from its sentry position to crawl out of the filthy hole, rising to stand like human bits of dust and twigs and blowing sand striking its hairy body.
But to the beast it was a signal of love, a gesture of welcome. The beast roared its breath foul. It held its contempt for that God who occupies a more lofty position than the master of the beast.

For the creature knew but one god: the Prince of Darkness, the Lord of the Flies, Ruler of all that is Evil.

From behind the sentry came a guttural sound as other beasts rose from their long sleep, surly and hungry . They craved meat and the sweet taste of blood, but the sentry again tested the wind as the wind spoke its reply.

The sentry held up one warning paw to those below, holding them at bay. He growled and the others drew back into the darkness of the evil smelling hole in the earth. They knew they must obey the master. Thee growling sentry told them to wait the master will tell us when we may move. Be patient for you have waited more than twenty years. Wait."