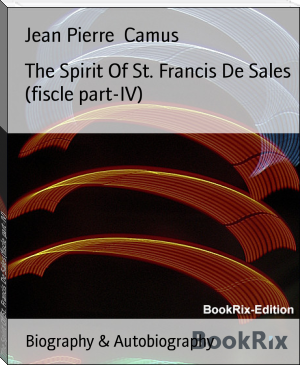 The Spirit of a Saint we may, perhaps, regard as the underlying characteristic which pervades all his thoughts, words, and acts. It is the note which sounds throughout the constant persevering harmony which makes the holiness of his life. Circumstances change. He grows from childhood to boyhood; from youth to manhood. His time of preparation is unnoticed by the world until the moment comes when he is called to a public activity which arrests attention. And essentially he remains the same. In private as in public, in intimate conversation as in writings or discourses, in the direction of individual consciences as in the conduct of matters of wide importance, there is a characteristic note which identifies him, and marks him off apart even from other heroes of sanctity. We owe to a keen and close observer a knowledge of the spirit of St. Francis de Sales for which we cannot be too grateful. Let it be granted that Mgr. Camus had a very prolific imagination; that he had an unconscious tendency to embroider facts; that he read a meaning into words which their speaker had no thought of imparting to them. When all such allowances have been made, we must still admit that he has given to us a picture of the Saint which we should be loath to lose; and that his description of what the Saint habitually thought and felt has made Saint Francis de Sales a close personal friend to many to whom otherwise he would have remained a mere chance acquaintance. The Bishop of Belley, while a devoted admirer, was at the same time a critical observer of his saintly friend. He wanted to know the reasons of what he saw, he did not always approve, and he was sufficiently indiscreet to put questions which, probably, no one else would have dared to frame. And thus we know more about St. Francis than about any other Saint, and we owe real gratitude to his very candid, talkative, and out-spoken episcopal colleague.