THE LIFE OF THE TRULY EMINENT AND LEARNED HUGO GROTIUS 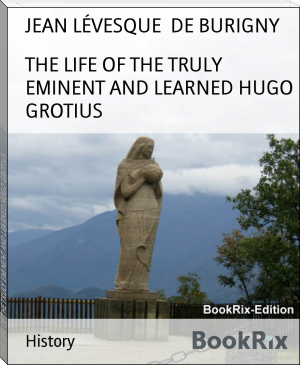 Jean Lévesque de Burigny (1692, Reims, France – 1785, Paris) was a historian, who in 1713, with his brothers, Champeaux and Lévesque de Pouilly, he began to compile a dictionary of universal knowledge, similar to an encyclopedia, which comprised twelve large manuscript folios, and afforded Burigny ample material for his subsequent works. In 1718, at The Hague, he worked with Saint-Hyacinthe on L'Europe savante, in twelve volumes, of which he contributed at least one-half. On his return to Paris, he devoted his time to historical research and published several works which stamped him as a conscientious scholar. Burigny, although sharing the ideas of the philosophers of his time, was by no means an extremist. He was a modest, peace-loving man, whose only ambition was to be a scholar, and his works show a great amount of learning; some, for instance his lives of Grotius and Erasmus, give very interesting data not elsewhere found.

This is the best hahaha

Avg temp in in India during summer reaches 48 degree