A Literary History Of The English People 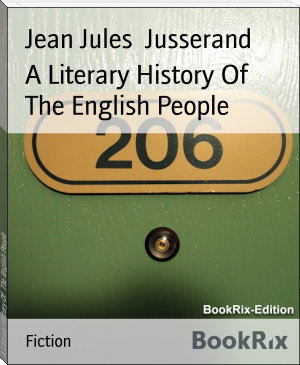 ean Adrien Antoine Jules Jusserand (18 February 1855 – 18 July 1932) was a French author and diplomat. He was the French Ambassador to the United States during World War I.[1]He was born on 18 February 1855 in Lyon. Jusserand studied at the University of Lyon and then a Ph.D. in history and a law degree in Paris.[2] Jusserand entered the diplomatic service in 1876. Two years later, he became consul in London. After an interval spent in Tunis (Tunisia was at that time a French protectorate), he returned to London in 1887 as a member of the French Embassy.n 1890, Jusserand became French minister at Copenhagen. In 1902, he was transferred to Washington, where he remained until 1925 during the Theodore Roosevelt, Woodrow Wilson, Warren Harding, and Calvin Coolidge administrations. He was a confidant of President Theodore Roosevelt and part of his "secret du roi" group.[3] During the Polish-Soviet War, Jusserand took part in a diplomatic mission to the Second Polish Republic. In 1919 he was involved with the Treaty of Versailles.