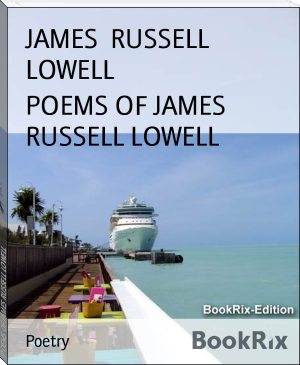 James Russell Lowell (/ˈloʊəl/; February 22, 1819 – August 12, 1891) was an American Romantic poet, critic, editor, and diplomat. He is associated with the Fireside Poets, a group of New England writers who were among the first American poets who rivaled the popularity of British poets. These poets usually used conventional forms and meters in their poetry, making them suitable for families entertaining at their fireside.

Lowell graduated from Harvard College in 1838, despite his reputation as a troublemaker, and went on to earn a law degree from Harvard Law School. He published his first collection of poetry in 1841 and married Maria White in 1844. He and his wife had several children, though only one survived past childhood. The couple soon became involved in the movement to abolish slavery, with Lowell using poetry to express his anti-slavery views and taking a job in Philadelphia, Pennsylvania, as the editor of an abolitionist newspaper. After moving back to Cambridge, Lowell was one of the founders of a journal called The Pioneer, which lasted only three issues. He gained notoriety in 1848 with the publication of A Fable for Critics, a book-length poem satirizing contemporary critics and poets. The same year, he published The Biglow Papers, which increased his fame. He went on to publish several other poetry collections and essay collections throughout his literary career.

Maria White died in 1853, and Lowell accepted a professorship of languages at Harvard in 1854; he continued to teach there for twenty years. He traveled to Europe before officially assuming his role in 1856. He married his second wife, Frances Dunlap, shortly thereafter in 1857. That year Lowell also became editor of The Atlantic Monthly. It was not until 20 years later that Lowell received his first political appointment, the ambassadorship to the Kingdom of Spain. He was later appointed ambassador to the Court of St. James's. He spent his last years in Cambridge, in the same estate where he was born, and died there in 1891.

Lowell believed that the poet played an important role as a prophet and critic of society. He used poetry for reform, particularly in abolitionism. However, Lowell's commitment to the anti-slavery cause wavered over the years, as did his opinion on African-Americans. Lowell attempted to emulate the true Yankee accent in the dialogue of his characters, particularly in The Biglow Papers. This depiction of the dialect, as well as Lowell's many satires, was an inspiration to writers like Mark Twain and H.L. Mencken.