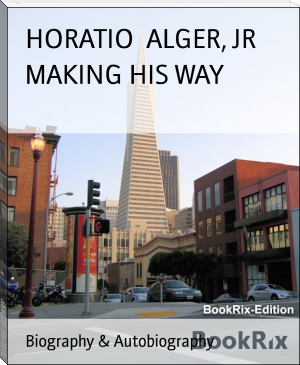 Horatio Alger, Jr. (January 13, 1832 – July 18, 1899) was a prolific 19th-century American author, best known for his many juvenile novels about impoverished boys and their rise from humble backgrounds to lives of middle-class security and comfort through hard work, determination, courage, and honesty. His writings were characterized by the "rags-to-riches" narrative, which had a formative effect on America during the Gilded Age. Alger's name is often invoked incorrectly as though he himself rose from rags to riches, but that arc applied to his characters, not to the author. Essentially, all of Alger's novels share the same theme: a young boy struggles through hard work to escape poverty. Critics, however, are quick to point out that it is not the hard work itself that rescues the boy from his fate, but rather some extraordinary act of bravery or honesty, which brings him into contact with a wealthy elder gentleman, who takes the boy in as a ward. The boy might return a large sum of money that was lost or rescue someone from an overturned carriage, bringing the boy—and his plight—to the attention of some wealthy individual. It has been suggested that this reflects Alger's own patronizing attitude to the boys he tried to help.

Alger secured his literary niche in 1868 with the publication of his fourth book, Ragged Dick, the story of a poor bootblack's rise to middle-class respectability, which was a huge success. His many books that followed were essentially variations on Ragged Dick and featured a cast of stock characters: the valiant hard-working, honest youth (who knew more Latin than the villain), the noble mysterious stranger (whom the poor boy rescued and by whom he got rewarded), the snobbish youth (cousin), and the evil squire (uncle).

In the 1870s, Alger took a trip to California to gather material for future books, but the trip had little influence on his writing. In the last decades of the 19th century, boys' tastes changed, and Alger's moral tone coarsened accordingly. The Puritan ethic had loosened its grip on America, and violence, murder, and other sensational themes entered Alger's works. Public librarians questioned whether his books should be made available to the young. By the time he died in 1899, he had published around a hundred volumes.

Want to prevent hackers? I wanted to prevent both malware and viruses without having to download 2 different softwares? This is what I found. So far so good! \nhttps://malwarebuster.com/mb/info01