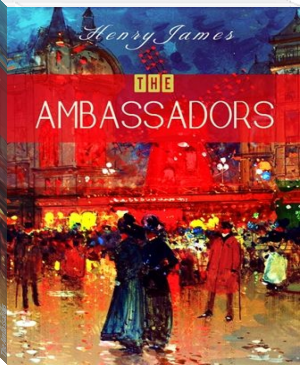 The Ambassadors is a novel by Henry James. Henry James got the central idea for The Ambassadors from an anecdote about his friend and fellow-novelist William Dean Howells, who, whilst visiting his son in Paris, was so impressed with the amenities of European culture, that he wondered aloud if life hadn't passed him by; from that intriguing suggestion grew Strether's long speech to Little Bilham about living "all you can".

The theme of liberation from a cramped, almost starved, emotional life into a more generous and gracious existence plays throughout The Ambassadors, yet it is noteworthy that James does not naïvely make of Paris a faultless paradise for culturally stunted Americans. Strether learns about the reverse of the European coin when he sees how desperately Marie fears losing Chad, after all she has done for him. As one critic proposed, Strether does not shed his American straitjacket only to be fitted with a more elegant European model, but instead learns to evaluate every situation on its merits, without prejudices. The final lesson of Strether's European experience is to distrust preconceived notions and perceptions from anyone and anywhere, but to rely upon his own observation and judgment.

Mediation/Intermediation: a major theme of the novel involves Strether's position as an ambassador. Strether, when giving his final account to Maria Gostrey, justifies his decisions by connecting his intermediary position to his concerns about gaining experience (and pleasure) whilst working in behalf of others. This conflict between personal desire and duty is important to consider when thinking about Strether's psychology.