The Adventures of a Boy Reporter 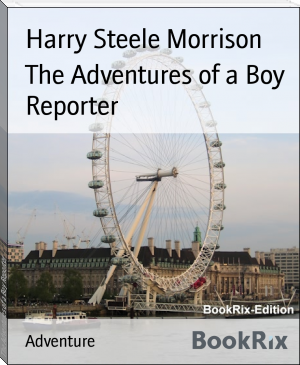 HARRY STEELE MORRISON Known as THE BOY TRAVELLER Offers three narratives of travel and adventure, descriptive of his personal experiences in foreign lands. Figure HARRY STEELE MORRISON The Mutual Lyceum Bureau, FRANK A. MORGAN, Manager, 6450 KIMBARK AVENUE, CHICAGO, ILL. Figure My Tramp Abroad IN HIS NARRATIVE of tramping through Europe Mr. Morrison describes his adventures during the eight months he spent abroad as a boy of sixteen, four years ago. At that time he started from Chicago for Longon with only twenty-five dollars in his pocket and worked his way through Belgium, Holland, Germany, Switzerland and France. He succeeded in obtaining interviews with President McKinley, Mr. Gladstone, Queen Victoria, President Faure and King Leopold. He crowded more startling adventures into these eight months than most people experience in a lifetime, and the account of his interviews with famous persons is amusing as well as instructive. Working My Way Around the World HAVING TWICE visited Europe, Mr. Morrison determined last spring to encircle the globe in his travels, and to do it without spending any money other than that which he could earn en route. He shipped aboard a steamer bound to Europe and through the Mediterranean Sea, and by dint of energy and perseverance he succeeded in reaching the Philippines, after visiting Gibraltar, Spain, Morocco, Malta, Egypt, Arabia, Ceylon and Singapore. He remained in our new possessions long enough to learn something of their characteristics, and then proceeded through China and Japan to San Francisco, where he arrived with more money in his pocket than when he left New York. It can be easily understood that such a trip as this was productive of many unusual experiences, and Mr. Morrison tells of them in his usual amusing style. The account of his interviews with the Khedive, the Shah of Persia, Aguinaldo and Prince Kotohito of Japan is particularly interesting. Mr. Morrison's Books A Yankee Boy's Success F. A. Stokes Company, New York Illustrated $1.25 The Adventures of a Boy Reporter L. C. Page & Company, Boston Illustrated $1.25 Senator Chauncey M. Depew His adventures are so clean and for such well-defined purposes, that he presents a fine example of the possibilities for getting on which can be utilized by the American boy. His simple story is an object lesson; it teaches that with good character and habits, with industry and courage, the American boy who is early thrown upon his own resources can rise by his own efforts and make a success in life. A Few Opinions of Y. M. C. A. Secretaries Geo. T. Coxhead, St. Louis Mr. Morrison is a clean, bright, Christian young man, and I believe the recital of his experience will be of great value to boys and young men generally. I hope that he will get a hearing in all of our Young Men's Christian Associations, as well as in other circles. G. A. Warburton, New York None can do better than get together a crowd of young people and have Mr. Morrison tell them of his expe