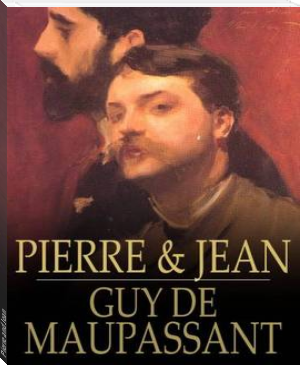 Pierre and Jean is a naturalist or psycho-realist work written by Guy de Maupassant. Pierre and Jean are the sons of Gérôme Roland, a jeweller who has retired to Le Havre, and his wife Louise. Pierre works as a doctor, and Jean is a lawyer. It recounts the story of a middle-class French family whose lives are changed when Léon Maréchal, a deceased family friend, leaves his inheritance to Jean. This provokes Pierre to doubt the fidelity of his mother and the legitimacy of his brother. Pierre discovers that his theories about his brother's illegitimacy are correct when he finds and reads old letters that his mother and Léon Marechal had been sending to each other. This investigation sparks violent reactions in Pierre, whose external appearance vis a vis his mother visibly changes. In his anguish, most notably shown during family meals, he tortures her with allusions to the past that he has now uncovered. Meanwhile, Jean's career and love life improve over the course of the novel while Pierre's life gets significantly worse. Provoked by his brother's accusations of jealousy, Pierre reveals to Jean what he has learned. However, unlike Pierre, Jean offers his mother love and protection. The novel closes with Pierre’s departure on an oceanliner. Thus the novel is organised around the unwelcome appearance of a truth (Jean’s illegitimacy), its suppression for the sake of family continuity and the acquisition of wealth, and the expulsion from the family of the legitimate son.