Q. E. D., OR NEW LIGHT ON THE DOCTRINE OF CREATION 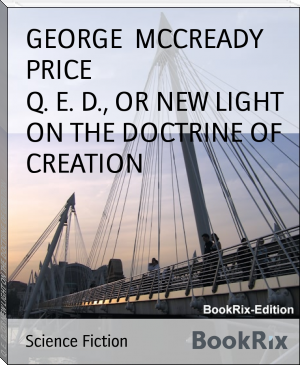 George McCready Price (26 August 1870 – 24 January 1963) was a Canadian creationist. He produced several anti-evolution and creationist works, particularly on the subject of flood geology. His views did not become common amongst creationists until after his death, particularly with the moderPrice was born in Havelock, New Brunswick, Canada.[1][2] His father died in 1882, and his mother joined the Seventh-day Adventist Church. Price attended Battle Creek College (now Andrews University) between 1891 and 1893. In 1896, he enrolled in a one-year teacher training course at the Provincial Normal School of New Brunswick (now the University of New Brunswick), where he took some elementary courses in some of the natural sciences, including some mineralogy.[3]

Price taught at a series of small-town schools from 1897 onwards, including at a high school in Tracadie between 1899 and 1902. Here he socially met Alfred Corbett Smith (head of the medical department at a local leprosarium), who loaned him scientific literature in his possession. Since he believed that the Earth was young, Price concluded that geologists had misinterpreted their data. In 1902, Price completed the manuscript Outlines of Modern Christianity and Modern Science before leaving Tracadie to serve brief stints as an Adventist evangelist on Prince Edward Island and the head of a new Adventist boarding academy in Nova Scotia. He briefly returned to book-selling in 1904, and then moved to New York in an attempt to become a magazine and newspaper writer.[3]

In a response to a plea from his wife, the Adventist church first employed Price as a construction worker in Maryland. He then was principal of a small Adventist school in Oakland, California, before becoming a construction worker and handyman at a newly purchased Adventist sanitarium in Loma Linda, California, where he published Illogical Geology: The Weakest Point in the Evolution Theory in 1906.[3] In Illogical Geology, Price offered $1000 "to any one who will, in the face of the facts here presented, show me how to prove that one kind of fossil is older than another."[4]n creation science movement starting in the 1960s.

Dont worry about the athiests they will see there fate.