Fire Of The Forge 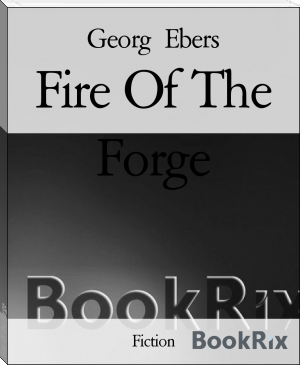 At Göttingen he studied jurisprudence, and at Berlin Oriental languages and archaeology. Having made a special study of Egyptology, he became in 1865 Dozent in Egyptian language and antiquities at Jena, becoming professor in 1868. In 1870 he was appointed professor in these subjects at Leipzig. He had made two scientific journeys to Egypt, and his first work of importance, Ägypten und die Bücher Moses, appeared in 1867–1868. In 1874 he edited the celebrated medical papyrus (Papyrus Ebers) which he had discovered in Thebes (translation by H. Joachim, 1890).

Ebers early conceived the idea of popularizing Egyptian lore by means of historical romances. Eine ägyptische Königstochter was published in 1864 and obtained great success. His subsequent works of the same kind—Uarda (1877), Homo sum (1878), Die Schwestern (1880), Der Kaiser (1881), of which the scene is laid in Egypt at the time of Hadrian, Serapis (1885), Die Nilbraut (1887), and Kleopatra (1894), were also well received, and did much to make the public familiar with the discoveries of Egyptologists. Ebers also turned his attention to other fields of historical fiction—especially the 16th century (Die Frau Bürgermeisterin, 1882; Die Gred, 1887)—without, however, attaining the success of his Egyptian novels.

His other writings include a descriptive work on Egypt (Aegypten in Wort und Bild, 2nd ed., 1880), a guide to Egypt (1886) and a life (1885) of his old teacher, the Egyptologist Karl Richard Lepsius. The state of his health led him in 1889 to retire from his chair at Leipzig on a pension.