ON THE FUTURE OF OUR EDUCATIONAL INSTITUTIONS 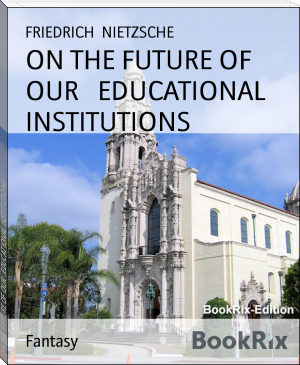 Nietzsche's key ideas include perspectivism, the will to power, the death of God, the Übermensch and eternal recurrence. One of the key tenets of his philosophy is "life-affirmation", which embraces the realities of the world in which we live over the idea of a world beyond. It further champions the creative powers of the individual to strive beyond social, cultural, and moral contexts.[4] Nietzsche's attitude towards religion and morality was marked with atheism, psychologism and historism; he considered them to be human creations loaded with the error of confusing cause and effect.[5] His radical questioning of the value and objectivity of truth has been the focus of extensive commentary, and his influence remains substantial, especially in schools of continental philosophy such as existentialism, postmodernism, and post-structuralism. His ideas of individual overcoming and transcendence beyond structure and context have had a profound impact on late-twentieth and early-twenty-first century thinkers, who have used these concepts as points of departure in the development of their philosophies.