Frederic Shoberl Narrative of the Most Remarkable Events Which Occurred In and Near Leipzig Immediately Before, During, 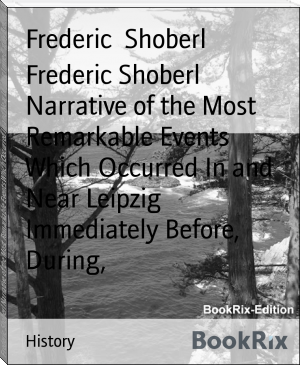 Shoberl was born in London in 1775, and educated at the Moravian school at the Fulneck Moravian Settlement in West Yorkshire.[3]

From 1809 he began editing Rudolph Ackermann's '‘Repository of Arts’' which had just started and was only at its third edition. Ackermann was seen as the populariser of aquatint engraving and his Repository of Arts was intended to cover "arts, literature, commerce, manufactures, fashions, and politics". At the beginning of February 1814, Schoberl and Henry Colburn founded and became co-proprietors of the ‘New Monthly Magazine’. For some time Schoberl was editor, writing many of the articles and reviews and editing Ackermann's magazine.[3]