Records of a Girlhood 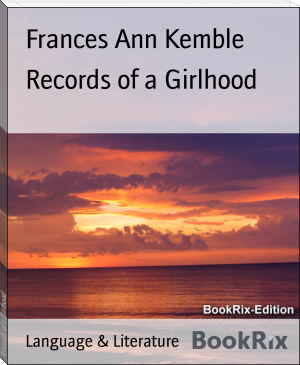 Frances Anne "Fanny" Kemble (27 November 1809 – 15 January 1893) was a notable British actress from a theatre family in the early and mid-nineteenth century. She was also a well-known and popular writer, whose published works included plays, poetry, eleven volumes of memoirs, travel writing and works about the theatre. In 1834 she married an American, Pierce Mease Butler, heir to cotton, tobacco and rice plantations on the Sea Islands of Georgia, and to the hundreds of slaves who worked them.

They spent the winter of 1838–39 at the plantations, and Kemble kept a diary of her observations. She returned to the theatre after their separation in 1847 and toured major US cities. Although her memoir circulated in abolitionist circles, Kemble waited until 1863, during the American Civil War, to publish her anti-slavery Journal of a Residence on a Georgian Plantation in 1838-1839. It has become her best-known work in the United States, although she published several other volumes of journals.