A society of mosquitoes interact with humans Von: Fouad Suleiman 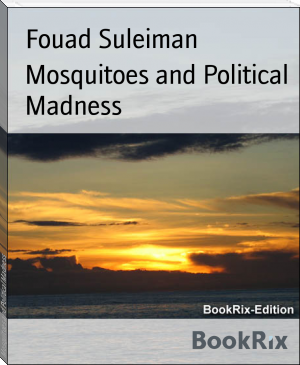 Kameela, the Superpictus female mosquito, stood on an oak coffee table where most of the light coming from the neon side lamp was focused, the light was strong and sharp, it was a kind of light Kameela fancied. Mumbo, a Bifurcatus Male Mosquito, stood beside her looking at the black and white spots on the front edge of her wings, then back at her eyes which were open wide. Kameela then looked up at Mumbo who was more than five times her size. "You know, I really don't understand why most humans consider us to be evil" Said Kameela.

-"If only they knew how sophisticated we are, they would probably change their minds" Answered Mumbo.

The electro-magnetic waves coming from Flinty, a Sergenti female mosquitoe who's about the size of Kameela, reached the antennas of Kameela and Mumbo, "Look at me guys, look over here" She shouted. Kameela and Mumbo looked at her from a distance to see her standing on the shoulder of a man, sucking out his blood, and by the look on her face that was gradually turning red, one could tell that she was enjoying every millisecond of it, and that she saw no aggression in the act she was engaged in. The man was lying on his single bed, reading a romance novel, totally unaware of Flinty’s presence. He had no shirt on for it was one of the hottest days of October 1996. Kameela and Mumbo signaled to Flinty to come and join them. Flinty took her time for she knew that the man was totally engaged in reading, and had no idea what was going on, and besides, Flinty perfected the act of sucking blood to a point where she did it with full confidence, and she was skilled to a degree that she could sense if a man noticed her or not by his perspiration rhythm, which she could feel by her antennas. When she finished her act, she flew proudly and joined the couple who were standing there in the light. Kameela shook Flinty’s hand and said “I’d like you to meet Mumbo, my friend.”

-“Nice to meet you Mumbo” Said Flinty, and shook his hand in caution, for he was a huge mosquito. “Where are you from?” continued Flinty.

-“I’m from down town Haifa, the slums of down town” replied Mumbo.

Mumbo smiling “So what do you do?”

-“I am a student of economics”

Mumbo stepped away and said “Oh, you’re into business”

-“What do you do then big guy” said Flinty.

-“I stand and talk” said Mumbo.