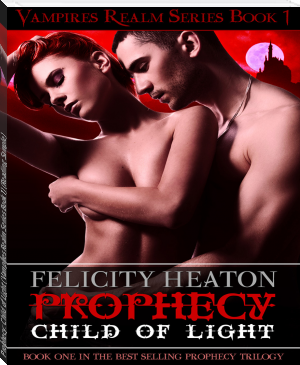 A vampire unlike any other, Prophecy lives life in the dark until the night she encounters a sensual dark-haired vampire who is both her enemy and the man who will change her world forever.

A loyal hunter for the Aurorea bloodline, Valentine is bound by duty to report her as the vampire of the prophecy, but he cannot shake the vision of them he saw in her blood. Torn between duty and desire, and determined to uncover the truth, Valentine goes against his order to execute her and kidnaps the beautiful Caelestis female instead.

Thrust into a terrifying world where the seven bloodlines and the Law Keepers are hunting her and her only hope for survival is Valentine, Prophecy battles her temptation to surrender to her illicit attraction to him and fights for her future.

When she discovers her extraordinary destiny, will she be strong enough to embrace it and stop a deadly war from igniting?

The first novel in the Vampires Realm series and the best selling Prophecy Trilogy, Prophecy: Child of Light, is part one in an epic tale of forbidden love that is sure to capture your heart and leave you craving more.

I want to Read the whole book and can't. Please send the rest of the book here

when will you be able to update this trilogy?