Christology Of The Old Testament: And A Commentary On The Messianic Predictions. Vol. 2 (fiscle part-XIII) 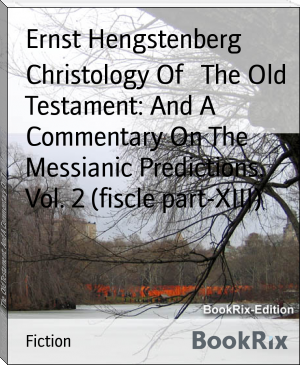 He was born at Fröndenberg, a Westphalian town, and was educated by his father Johann Heinrich Karl Hengstenberg, who was a famous minister of the Reformed Church and head of the Fröndenberg convent of canonesses (Fräuleinstift). His mother was Wilhelmine then Bergh. Entering the University of Bonn in 1819, Hengstenberg attended the lectures of Georg Wilhelm Freytag for Oriental languages and of Johann Karl Ludwig Gieseler for church history, but his energies were principally devoted to philosophy and philology, and his earliest publication was an edition of the Arabic Mu'allaqat of Imru' al-Qais, which gained for him a prize at his graduation in the philosophical faculty. This was followed in 1824 by a German translation of Aristotle's Metaphysics.