The Inside Story Of The Peace Conference 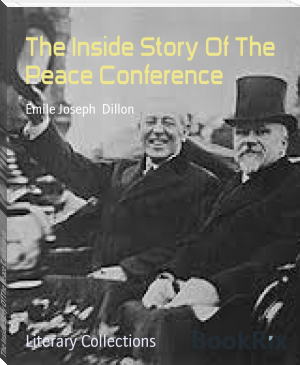 The choice of Paris for the historic Peace Conference was an
afterthought. The Anglo-Saxon governments first favored a neutral
country as the most appropriate meeting-ground for the world's
peace-makers. Holland was mentioned only to be eliminated without
discussion, so obvious and decisive were the objections. French
Switzerland came next in order, was actually fixed upon, and for a time
held the field. Lausanne was the city first suggested and nearly chosen.
There was a good deal to be said for it on its own merits, and in its
suburb, Ouchy, the treaty had been drawn up which terminated the war
between Italy and Turkey. But misgivings were expressed as to its
capacity to receive and entertain the formidable peace armies without
whose co-operation the machinery for stopping all wars could not well be
fabricated. At last Geneva was fixed upon, and so certain were
influential delegates of the ratification of their choice by all the
Allies, that I felt justified in telegraphing to Geneva to have a house
hired for six months in that picturesque city.